About 15 years ago, Korean companies started to see the potential of sponsoring famous gamers. Previously, brands like Samsung and CJ Games, one of South Korea’s most successful game developers, sponsored Korean esports teams living in the same house and trained them 12 hours a day.

That professionalism gradually spread outside the country, as Western sponsors appeared in the teams. However, at first, very few units were really serious like in Korea.

This may be in part due to the perks of the top eSports stars here. One of the players of CJ Entus, a team sponsored by CJ Games, said a female fan followed him to competitions for two years to take pictures. Finally, she sent him an album of all the photos she took.

However, the life of an esports star is not just flashy. Players must practice non-stop, spending many days in front of the screen.

Korean teams are known for their tough attitude in game tournaments, but the country’s success in League of Legends is indisputable. Many Western teams, including Cloud9 of North America, Fnatic in Europe have come to see how the teams train.

Some foreign recruiters also tried to simulate the grouping and training methods used in Korea, but due to cultural differences, the initial results were often not satisfactory. 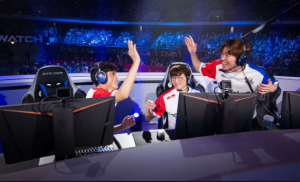 The monotony in the lifestyle of Korean gamers also leads to concerns about the potential harm due to spending too much time playing the game. Occasionally, there are articles reporting that gamers die of exhaustion after playing for days without rest.

Cho Se-hyoung, a professional gamer, thinks that he considers himself to be like a sports player with the same training schedule, responsibility and pressure as a player on the pitch.

Despite the grand tournaments, the matches played at the club is still an important arena for gamers. The image of high school students gathered to play games, sit on luxurious chairs in front of big screen PCs, shout tactics, scream happily or cry miserably has become so common in Korea.

Bae Ye-seong, 18, thinks League of Legends is not a factor in making friendships, but it makes up a large part of Bae and his friend’s world.