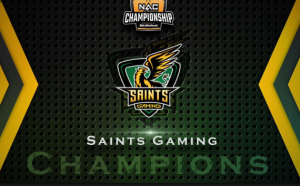 As with traditional sports leagues like the NFL or NBA, eSports work in a similar way. In fact, in April, the NBA held a “draft” event for the launch of its new eSports tournament, revolving around the basketball game title NBA 2K. In this “draft” event, 102 professional eSports gamers have been selected, with every privilege and etiquette usually reserved for true athletes.

NBA commissioner Adam Silver, standing in the middle, posing for photos with gamers at the “draft” event of the NBA 2K tournament in April 2018.

Universities also jumped on the bandwagon. More than 50 universities in the US offer eSports programs, recognized by a governing body called “National University eSports Association” (NACE). The NACE Championship has a prize pool of thousands of dollars and is awarded in the form of scholarships to winning gamers.

Where does eSports make money?

According to Newzoo research, eSports revenue will reach USD 906 million worldwide in 2018. By 2019, this number is expected to exceed USD 1 billion.

It is a lucrative market, not only for gamers, but also for brands and video game makers. Madden 19, the game played at Jacksonville (where the shooting was mentioned at the beginning of the article), is the latest installment of the 30-year-old Madden series. Since then, the series has sold over 130 million copies, grossing more than $ 4 billion.

ESports players, like traditional athletes, can reap huge amounts of money: tournaments can offer millions of dollars in prize money and are often divided among the winning team players. This means that the top players in the world can easily earn 7 figures per year. Game teams and event organizers also benefit from ticket sales in those events. Speaking of ticket sales, the popular League of Legends tournament in 2017 brought ticket sales up to $ 5.5 million.

After the shooting, EA Sports (the Madden game developer) canceled the remaining 3 events about Madden Classic to re-evaluate the safety protocols for gamers and viewers.