After the Big Update in August, the game publisher also officially released the Heroes of the Team season (HOT). So what are the 5 best strikers this season? 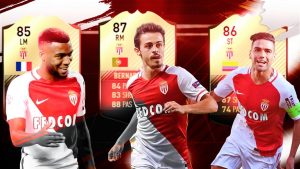 The record of 260 goals in the Premier League is more than enough to talk about the stature of assassin striker who was very successful in the colors of Newcastle. Alan Shearer is simply an unstoppable striker, both in the game and in real life.

If the NHD or TT has not fully portrayed the quality of this striker, HOT season has appeared her at the right time. Giving Shearer a general index of 98 with a purple index, the publisher made Shearer one of the scariest assassins of the HOT season.

From seasons like NHD, TT or TC., “Eastern European antelope” is not so highly appreciated because the speed is not too fast and the physical indicators are quite poor. However, when in the hands of gamers, Sheva immediately became an extremely effective striker.

In FO4, Sheva’s forte is CF, which made his name in AC Milan. Besides, the coaches can also put him in the ST position, where the Ending score of 105 will help Sheva do everything that a true striker can do.

Maybe all too familiar with this name but at the current FO4, Ronaldo de Lima is still something very different. If compared to the two seasons, the NHD and TT will be considered a significant upgrade and much more comprehensive.

HOT BOSS HOT has a general index of up to 98, next to the towering sub-index system like End of Point 105, Speed ​​105, Acceleration 104. In addition, this player also owns more The stats are extremelyBlack Panther valuable, such as being subtle or human, which will be worthwhile against high AI defenders.

There is no need to talk too much about the level of “Black Panther” Eusebio when this player himself was ICON is the name +1 most expensive at the moment. Speed, stamina, the ability to shoot extremely fast are the strongest points of Eusebio, things that maybe not many current strikers own.

Eusebio HOT, though not owning a dominant set of players compared to other top strikers, but what makes this player worth is in the ingame experience. According to Korean servers, Eusebio is currently the most popular HOT season forward.

The last name in the top striker today will be the birth of the attacking play, Johan Cruyff. In FO4, Cruyff’s playing style is only encapsulated in the phrase “Artist but effective”.

Cruyff HOT owns a staggering set of indicators. So it is quite understandable that many coaches think that only Cruyff is controlled by a relative player. hand-to-hand, the only way to get the ball in “saint Johan “‘s foot can only make mistakes.