Thanks to the evolution of esports, gamers are now recognized at many universities and they will have a graduate degree like any profession.
With the recent strong growth of esports, gaming is no longer considered a “free career”. Gamers can fully earn a college degree by playing games.
Staffordshire University is one of a number of gaming schools. Staffordshire is just one of many UK and US universities that recently opened programs to capitalize on the needs of the booming gaming industry.

The gaming industry has been recognized

In the United States, several universities including Virginia’s Shenandoah University, Becker College in Massachusetts and Ohio State University have in turn launched professional esports degrees.
Ryan Chapman, an 18-year-old student, shared that parents were initially skeptical when it came to learning about professional esports. “Over time, they started to realize how big and fast the industry is growing. In the end, they also recognize this is a great time to join this great industry,” he said. .
Chapman is one of many students participating in the study of playing Counter Strike – the most popular first-person shooter game in the world of esports. 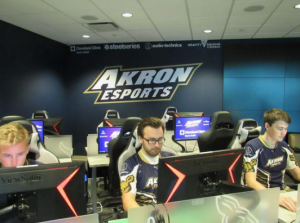 In 2018, Staffordshire University launched e-sports programs for bachelors and masters. Students mainly study industry-specific marketing and management skills. Expected this fall, the school will expand the program to London in the UK. Meanwhile, many other schools are offering similar esports courses in the UK, Singapore and China.
More specifically, some schools such as the University of California are offering scholarships to top players to attract them to register. This is supposed to be for top athletes only.

Piece of cake” worth 1.1 billion USD

According to Newzoo, this year, the global esports market is expected to reach $ 1.1 billion in revenue. Compared to 2018 in sponsorship and ticket sales, the figure has grown by more than $ 230 million.
Newzoo expects that in 2019, the global esports audience will grow to about 454 million thanks to viewership on livestream platforms like Twitch or Microsoft’s Mixer.