E-sports players have seen a phenomenal increase in the rewards of tournaments. Although the prize money is not really an assessment of the quality of an event, it is still one of the main goals for the players to decide whether or not they attend.

The first E-sport award was in 1997, Dennis “Thresh” Fong won a Ferrari 328 after winning the Quake. In 2006, John “Toxjq” Quick received a Rolex watch at the WSVG Quake 4 championship. Those were their memorable moments. But now the prize is so great that players can retire right after winning the trophy.

The major contribution to this figure is due to the support from crowfunding (community contributing money to the prize), when the developers decided to sell more in-game accessories to players to increase the total amount of bonuses.

Valve, the developer of Dota 2 and Counter-Strike: Global Offensive, is currently the most successful company with this model. The most prestigious Dota 2 event, The International, has increased its outstanding bonuses over the past 6 years.

The largest total award of each event is as follows. 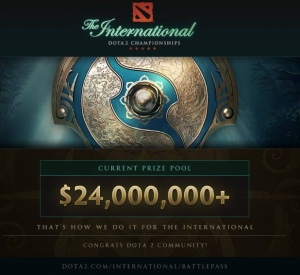 Valve’s annual international Dota 2 tournament has broken the E-sport award record for 7 consecutive years. In 2011 and 2012, the prize pool totaled $1.6 million, but by 2013, the event became the most successful example of the ‘crowfunding’ model in E-sport history.

For the first time in League history, Riot Games allows fans to increase the total prize by buying in-game items. At first it was only $2 million, the total amount of the prize money increased to $5 million, making it the biggest prize event in League of Legends.