The relationship between PC makers and the eSport community is becoming increasingly close, paving the way for a “money-making” era in the next few years.

With the strong development of the gaming smoke-free industry, it is not surprising that there are now more than 1.2 billion gamers worldwide. Whether it’s just a hobby, a passion or a hard-core fan of popular titles, it’s undeniable that the gaming community is becoming stronger and more comprehensive. This has led to the development of a number of other types of follow-up services such as accessories, streaming and especially eSport.

Recently, market research firm Newzoo estimated that the eSport industry will earn nearly 700 million USD by the end of 2018, reaching a growth rate of 43% compared to last year. Newzoo also said that this number would double by 2020, reaching 1.5 billion USD.

And of course with the “speed up to the wind” of eSports, the manufacturers of PC hardware also cannot ignore this rare opportunity to make money. Not only reaping countless benefits now, but in the future, their profits will likely be expanded even more thanks to the increasing demand for PC gaming.

A growing relationship between PC and eSport 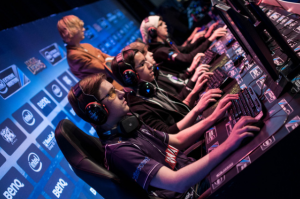 For PC gamers, upgrading and optimizing configuration is still a constant and indispensable need. Besides, the emergence of eSports as well as other video game tournaments makes them yearn to perfect their machines, not only in terms of performance but also in the outside design. This trend is becoming more and more popular, attracting a lot of gamers around the world.

Responding to that huge demand, PC manufacturers have consistently launched high-end processors and a range of video card products with impressive performance for the most “gaming” gamers. . With the growing number of eSports participants, hardware manufacturers are forced to expand their products and services (which can easily be spotted by the current trend of high VR devices).

It is great that manufacturers of the same gaming world always exist in parallel and promote each other to develop like that.