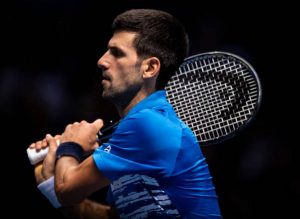 If Novak Djokovic want to finish the season at the year-end number one for the record-equalling 6th time the likely scenario for him is that he’s going to need to win both of his remaining tournaments. Djokovic is right in contention to finish the year as number one with 2,500 points still to play for although the Serbian ace currently finds himself trailing Nadal by 1,280 points.

Novak Djokovic has historically finished seasons stronger than Nadal and he is the better indoor player out of the two. Djokovic also has a great record in both London and Paris unlike his Spanish rival. The world number one has won the ATP Finals 5-times in his career, while he’s won the Paris Masters 4-times. On three occasions the Serbian ace has also won in the same season both of these titles. The Serbian ace has also won more ranking points combined at the ATP Finals and Paris Masters than Nadal in 9 of the 12 seasons since Djokovic first qualified for the ATP Finals in 2007. In fact, when both were fit enough to play them, the last time was back in 2010 when Nadal gained more points combined than Djokovic at these two events.

It’s out of Djokovic’s hands right now, however. Nadal could still have good runs at both events, as Novak Djokovic wouldn’t be guaranteed the year-end number one even if he was to win both tournaments. Also, right now Djokovic is not playing at his highest level. This year the Serbian ace has been extremely inconsistent on hard courts and has failed to win back-to-back titles all season. This year Djokovic struggled at all of the hard court Masters events and since then he has only won one more title on this surface, while in January he won the Australian Open on hard courts back.

Novak Djokovic once was but not currently the dominant player, but he’s going to give himself a fantastic opportunity for a record-equalling 6th time as being the year-end number one if during this last month of the season he can rediscover his best tennis.