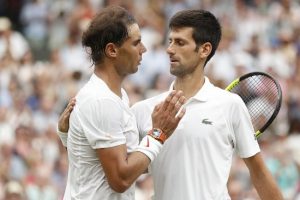 How many ranking points for grabs to leave up this season?

These two great players are both set to play each this year in two more tournaments, and they two will be playing at the same two events. They’re both set to play the ATP Finals in November and the Rolex Paris Masters in October despite any withdrawals. This season both players have the opportunity to win 2,500 more ranking points.

We still have tournament previews for both the Erste Bank Open and the Swiss Indoors Basel while neither Novak Djokovic or Rafael Nadal are competing this week.

What should Rafael Nadal do to clinch fifth year-end number one?

However, it should be noted that the Spaniard has historically had a lot of injuries to contend with at this stage of the year and Nadal has never won either of these two remaining tournaments that never produced his best tennis indoors. Nadal only been able to play the ATP Finals in 3 of the last 7 years and the Paris Masters in 3 of the last 9 years because his late-season injuries have really hampered his chances at these two tournaments. While in recent years he does have a decent record at them, he has struggled to actually play these tournaments when he is fit enough to compete.