On May 9, 2019, millions of e-sports fans around the world focused their attention on Hanoi with the Mid-Season Invitational Tournament (MSI), where they first hosted the largest international scale ever Electronic Sports Tournament. Vietnam plays the role of host with the Jumpstart Round in Ho Chi Minh City and the Group Round in Hanoi from May 10 to May 14, 2019. The tournament brings together the most powerful teams in the world today. 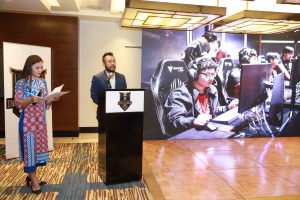 International E-Sports Tournament 2019 – League of Legends – Mid – Season Invitational 2019 is a tournament produced by Riot Games and is held annually between spring and summer seasons in all systems of League League all over the world. MSI 2019 is one of the world’s second-largest LOL tournaments, the participating teams of MSI 2018 have collected over $ 1 million, just after the annual World Finals. Settling together 13 championship teams from 13 professional League tournaments from 13 regions / countries around the world.

Vietnamese owner Phong Vu Buffalo is extremely eager to express themselves. Vietnamese boys have the opportunity to confront strong teams like Flash Wolves (Taiwan), Team Liquid (North America), SK Telecom T1 (Korea), Invictus Gaming (China), and G2 Esports ( Europe). With the victory over Vega Squadron (Russia) in the final match of the Jumpstart Round, Phong Vu Buffalo has helped the Vietnamese region have a total of two teams to participate in the 2019 World Championship at the end of this year.

League of Legends is one of the most popular electronic sports in the world, attracting nearly 100 million viewers (unique viewers) at the 2018 World Championship Cup. In Vietnam, Spring Tournament 2019 Newly organized (Vietnam Championship Series – VCS 2019) attracted 38.5 million views with over 9.5 million hours of viewing – 35% more than the same tournament last year, according to VETV data – a top 10 YouTube electronic sports channel.

MSI 2019 is expected to break the viewer record, estimated at 65 million fans. In addition to matches broadcast live on Riot Games authorized Channels of online video platforms, in Vietnam, matches are also broadcast live on the Sports Channel of Vietnam Cable TV – VTVcab .