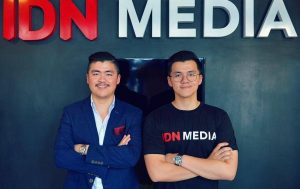 GGWP.ID is abbreviation of Good Game Well Played Indonesia. GgWP is usually used in esports games to talk about an exciting match that players play beautifully, following the general rules of the game. At the end of the match, the winner does not show his arrogant attitude but encourages the loser to try harder to have good battles, or in later times. And conversely, the loser is not depressed, swearing but congratulating the winner. Even losers want to make friends with winners to learn combat experience.

IDN executive director Winston Utomo said in a press release: “We believe that e-sports is just beginning. With GGWP.ID, we envision creating the largest and most influential e-sports company in the region for millennials and Gen Z generations. ”

GGWP.ID will have four main business units targeting e-sports enthusiasts, event organizers, teams and a multi-platform creative digital agency, run by the founder and Ricky Setiawan executive director together with a group of 60 people.

IDN called for a round of C-series in January this year from EV Growth, a partnership of venture capitalists East Ventures, Indonesia’s Sinar Mas group and Internet company Yahoo! Japan. Other investors include True Digital & Media Platform, a company of Thailand’s Charoen Pokphand Group and Line Ventures, a joint venture of Line mobile messaging application.

Electronic sports-related businesses in Asia have attracted the attention of recent venture capital companies. In March of this year, EVOS Esports, an e-sports company in Indonesia, announced the A series callback that earned $ 3.8 million (3.4 million euros). In the same month, Gojek’s online traffic app investment department invested US $ 35.5 million in Indian sports start-up company Mobile Premier League, according to news on kr-asia.com.