In the future, eSports will rise even more strongly in this era of information technology, it may become the “king sport” of the modern world.

eSports is expanding its territory around the world, with numerous sponsorship, advertising and cooperation contracts appearing every day. Why do big brands invest in this segment, while in the past most did not care about the game industry? Is “traditional” sport accepting eSports?

To answer these questions, let’s compare eSports with the four most popular traditional sports in the US.

First of all, we find that the majority of American football fans are over the age of 35 (56%), while eSports fans are much younger, with 73% under 35 years old. As a result, eSports is most popular with Y generation men (those born during the period from the early 1980s to the early 2000s, the first generation to grow up with the commune media. Assembly). In fact, up to 22% of these groups regularly watch eSports, this ratio is even higher than ice hockey and baseball. 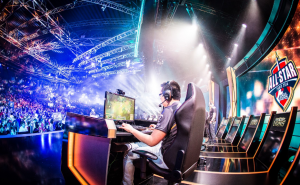 Three reasons why sports and consumer brands are investing in eSports