Whether a non-physical activity like gaming can be considered a sport or not, is it worthy of being put into the Olympics?

Esport will be officially organized for the first time in history at the Asian Games held in Indonesia, and gamers and supporters of this new sport hope. that through it, skeptics will see that video games deserve to be considered a sport like many other physical activities.

According to SCMP, while stakeholders expect that the event will open the door for Esport gamers to compete in the Olympics in the future, it is facing a battle against the times. It is believed that video games tend to incite violence and cause mental health problems that are called “gaming disorder syndrome”.

Extremely popular game of Japanese game developer Konami Digital Entertainment Co. “Pro Evolution Soccer 2018”, also known in Japan as “Wining Eleven 2018”, and “League of Legends” MOBA games are 2 of the 6 selected games to compete in. The match at the event will take place on August 26 here and will last for 7 days. 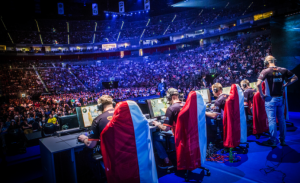 With the rise and popularity of Esport, a number of professional sports organizations such as the National Basketball Association (USA) and Formula One Motor Racing have recognized this type of sport by setting up tournaments. of their own, with the rewards of course are huge cash.

Many large companies, including important partners of the International Olympic Committee (IOC) are Alibaba Group Holding Ltd – owners of SCMP, and Intel Corp. also expressed their excitement in investing in these tournaments, to take advantage of potential marketing campaigns in the future.